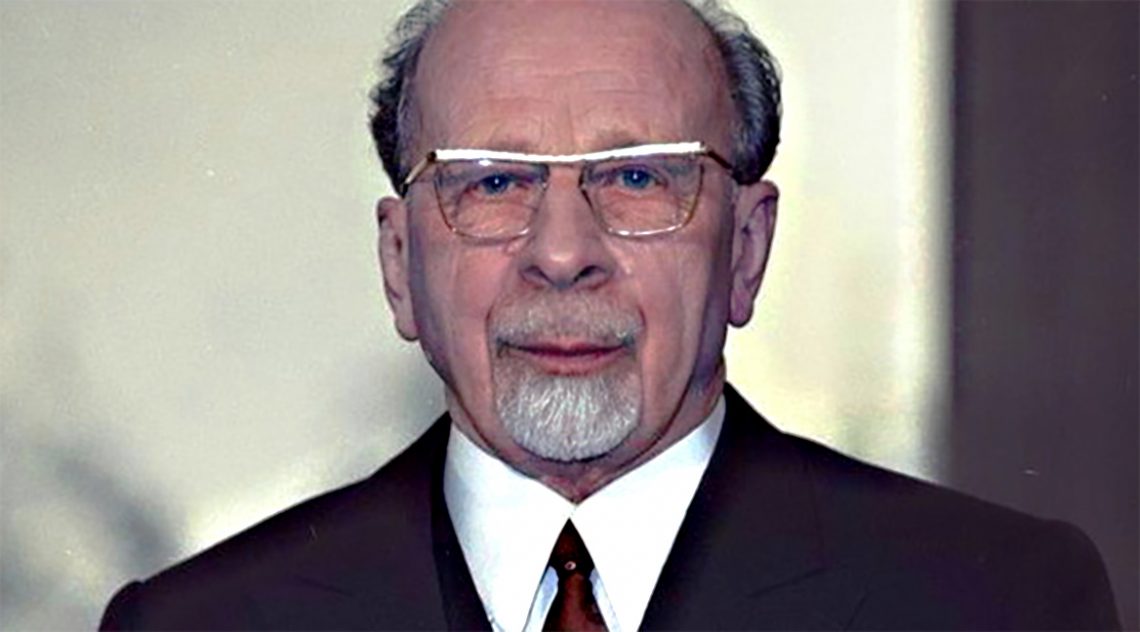 Walter Ulbricht, strongman of the German Democratic Republic between 1949 and 1971, was not a very nice man, by all accounts: a rigid bureaucrat with a relentless survival instinct that cost more than a few comrades dearly. He was responsible for the building of the Berlin Wall, intiated the East German police state, and wasted few tears when dealing with internal troubles. In 1971, he got deposed through a typical Eastern Bloc palace coup and was replaced by another not very nice man, Erich Honecker. Yet despite his questionable resumé, Ulbricht’s reputation today is much better than that of his successor’s. How is that even possible?

The German Youtube Channel  Zeitzeugen-Portal interviewed many of Ulbricht’s former collaborators, assistants, and party comrades, who told their stories about a not very nice man. Yet astonishingly, they do so with what feels like compassion and even sympathy for their former leader. Years have passed of course, recent memories turned into ancient history, and somehow even this unsympathetic figure has become a part of nostalgia along the way.[1]I am not, in any form, belittling the suffering of people under Ulbricht’s régime; we’re talking about perception here, not historical fact.

It’s not difficult to see why that’s a bit weird. Ulbricht was a committed Stalinist who was responsible for the suppression of the 1953 Uprising in the GDR, a politician who denounced the democratic movements in Hungary (1956) and Prague (1968) and praised the Soviet intervention in those countries. A leader with no oratory skills to speak of (his squeaky fistelstimme was often mocked), he stood for a rigidly technocratic approach to government, in which the individual counted for nothing.

In fact, things went rather better for a while after Honecker took over. Consumer goods were more available and the sense of lagging behind the west became far less pronounced. On the other hand, while the police state (the infamous Stasi) took a less violent turn it did become omnipresent. And of course, Honecker became the ultimate symbol of the GDR’s failure. Briefly after he’d toasted Gorbachev at the forty-year anniversary proceedings, his country ceased to exist altogether. Not the greatest track record, perhaps.

What I think happened are two things, which both reveal a lot about how we gauge the past. Firstly, after their initial idolation of the demise of the régime, East Germans began to experience regret about the loss of their country and their way of life. Few had counted on this visceral reaction, which initially focused on concrete elements (changes in everyday things, the loss of free healthcare and housing, and so on) but increasingly extended to a feeling of having lost a vital part of their culture.[2]The term Ostalgie has been coined for this sensation, but that is somewhat problematic as it has since been co-opted by westerners and now carries a degree of irony and sometimes even ridicule that … Continue reading

Secondly, the figure of Ulbricht, along with the GDR of that era, became a figure of absurdity, something so far removed from current reality that it began to be regarded as a comic-book character. The GDR under Ulbricht gained an almost abstract character, and not something relatable to modern citizens. After about 2000, few that had suffered personally at Ulbricht’s hands were still alive, and in any case they were vastly outnumbered by those harboring a grudge towards Honecker.

In a way it is a perfect embodiment of Michael Thompson’s Rubbish Theory, which describes how a phase of neglect and subsequently transfiguration is necessary to create cultural value. As a public persona Ulbricht had gone through the stages of fame and neglect, and after about 2000 was ready to be re-imagined. One underling described how Ulbricht the public figure and the private person were one and the same. Because “you had to be in a system like that, or you would have shot your mouth off at some point” (dann verplappert man sich). In our modern time, where every aspect of our private life is under as much scrutiny as our professional existence, such single-minded neglect of one’s private sphere is unimaginable, and contributes to Ulbricht’s other-worldliness.

The German channedl ZDF mocking one of the most famous phrases from German history: “No one has the intention to build a wall” (copyright Walter Ulbricht).

German history isn’t too full of light-heartedness, and it seems here is where Walter Ulbricht has been thrust into this niche. His outline has become the ultimate manifestation of the GDR: an image from a comfortably distant historical past, of a very different time and also not burdened by failure. It is not an image that has much to do with a real person any longer, but as the GDR’s own Asterix, it seems to work well.