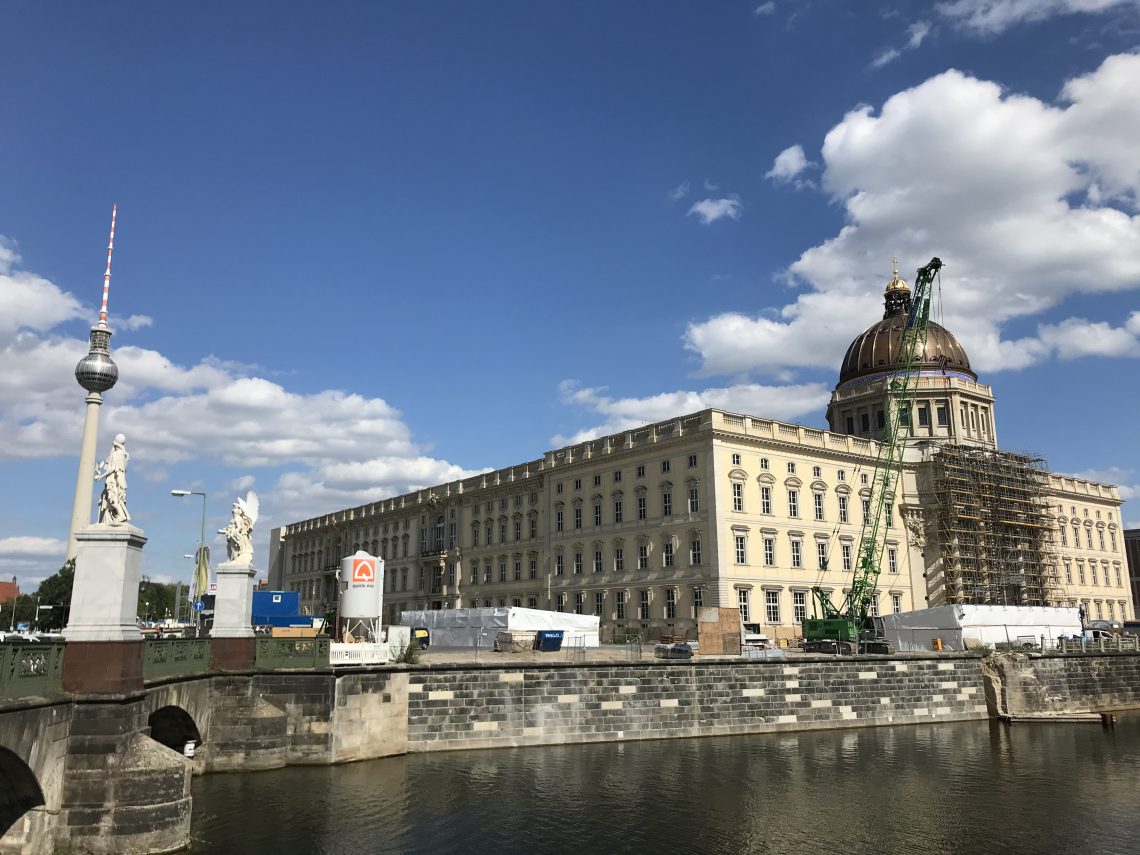 The Berlin Stadschloss, or Humboldt-Forum by its official name, has finally opened.[1]Its literal translation into English would be “city castle”, but that doesn’t do it entirely justice since it was never a fortification. “City palace” seems more accurate. After decades of architectural and ideological haranguing, it was completed largely within budget and within the time allotted, something of an achievement in modern Berlin, it seems. And despite the criticism, I want to argue that the palace that we see today is an almost perfect solution: for the site, but more importantly for the city.

The original palace was removed in 1950 because the authorities of the GDR considered it too much of a reminder of the capital’s militaristic past. This was irrespective of the fact that considering the circumstances, it wasn’t in a hopeless state, and certainly no worse than the Berliner Dom across the street. Unfortunately, knocking down even more buildings than were lost by the bombs and the Russians seemed to be on many administrators’ minds both in the east and west of the city at the time. Of course, it was first stripped of valuables, and the window from which Karl Liebknecht supposedly announced[2]He might not have; we only know for sure that he announced it from a window in the building, but having him do so from the same balcony where Wilhelm II announced the beginning of World War 1 was … Continue reading the communist revolution in 1918, would become the new frontispiece of the seat of the GDR’s government, the Staatsratsgebäude.[3]So, yes, we now have two of those. Berlin’s city palace from the air, late 1920s. The Apothecary Wing is at the bottom.An enlightened palace

The tragic fact was that it wasn’t really a true emblem of militarism to begin with, unlike about a dozen building in its immediate vicinity. Rather, it symbolized the other, enlightened side of enlightened autocracy. From the end of the 17th century the building had served as the city residence of the Hohenzollerns, and it was extended in the middle of the 18th by the architect Andreas Schlüter. He transformed and extended a somewhat haphazard assemblage of buildings into a more-or-less uniform baroque whole – basically its present form. The interior became as opulent as you would come across in any European palace at the time.

A large part of the older structures on the northern bank of the river Spree were kept intact, however. Known as the “apothecary wing”, they looked and felt very much like an annex with its somewhat unwieldy combination of earlier styles. The palace wasn’t really altered until the reign of emperor William II. Somewhat obsessed with representation, he decided to restyle the Apothecary Wing, and to replace the row of houses blocking the palace’s view from the river Spree by a memorial dedicated to his grandfather, the first German emperor Wilhelm I.[4]Wilhelm II dotted Germany with such memorials. Generally referring to “Kaiser Wilhelm” in general terms, they implicitly lauded both Kaisers Wilhelm, of course.

After the GDR authorities blew up the building, the area was initially used as parade ground. However, in 1976 the sparkly new Palast der Republik was opened on the site; a combination of parliament building and entertainment venue. Sarcastially dubbed “Erich’s lamp shop” by some because of the many lights, it was nonetheless a successful building, and gave a bit of profile to the part of Berlin that had seen the most extensive destruction.

After German reunification, the Palast der Republik became something of thorn in the city’s side. Not only did it remind many of those now in office of a past best forgotten, it was now also bereft of its main function and in dire need of renovation. Eventually, the presence of asbestos led to its demise. Although an explicit decision to tear it down took an astonishingly long time, by the early 2000s its state made it very clear which way the rabbits were running.[5]To coin an old GDR metaphor.

At the same time, a citizen movement to resurrect the old city palace gained momentum. Almost unavoidably, however, the issue quickly became a contentious one and ended up in a shouting match between political opposites. Some (particularly on the political left) wanted to maintain or even rebuild the Volkspalast as a symbol of the GDR, a state that had disappeared and many of whose citizens felt ignored and betrayed by the “new” Germany. More conservative voices wished for an entirely faithful facsimile of the old building.

What we got in the end was, as so often, a compromise, dicated by financial as well as political restraints. To most, the new Humboldt-Forum will look like an exact copy of the old Stadtschloss. Of the courtyards, the famous Schlüterhof was restored to its original state, three of the four façades are more or less identical to the old palace, and the tower on the western side has regained its dome, complete with cross (a point of some contention).

On the river bank, it’s a different story, however. Here, we see a modern, somewhat severe building that reminds more of the Palast than of the Schloss. The interiors are also contemporary, with little or no attempt at recreating the old Schloss‘s rooms. They do follow its interior plan, though, leaving later restoration as an option. Sofar, I’ve seen little evidence that this is going to happen soon, and it seems unlikely since the building is going to house a number of cultural institutions that would feel extremely restricted in a mock baroque space.

As with many compromises, there has been criticism – from those that consider the new/old building a piece of kitsch (this section unsurprisingly contains many an ideologically and monetarily disgruntled architect), but also from those that lament how it isn’t enough of a facsimile. They would rather have seen the Apothecary wing restored, as well as the interior. Both these groups seem to look particularly at the site and the building, but few consider its place in the city, and this is probably where the new building shines the most.

You see, the Schloss was historically also the eastern bookend of Unter den Linden, the broad thoroughfare leading to the Brandenburg Gate and beyond into the Tiergarten. After the demolition of the Schloss, what was left was a huge wasteland reaching from the western bank of the Spree to the Alexanderplatz – an area almost a kilometer in length. Although building projects like the TV tower and the Palast solved this to some extent, one of the issues with the GDR Palast was that it was built too far away. It occupied only half of the area of the old Schloss, the other half being taken up by parking space.

Walking up from the Brandenburg Gate, the Humboldt Forum now completely dominates the view on the far end of the avenue. And perhaps as importantly, it does so in a way that is in stylistic harmony with its surroundings. From a city planning perspective, these are important considerations.[6]As I wasn’t in the position to make photos because of COVID, I owe you those.

From the other end, the story is rather a different one. Unlike Unter den Linden, where efforts were made to restore the quarter to its former glory, this area was entirely razed during and after the war. When part of it was rebuilt, little consideration was given to history, and after reunification, new developments and renovations of older buildings only enforced the modern character of the neighborhood. Coming towards the Schloss from this side, a more modern façade makes a lot more sense because, again, it is more in tune with that part of the city.

In effect, this has turned the corner where the modern façade of the Schloss morphs into the 18th century baroque one into something of a portal between the “new” and “old” Berlin. And while it might have been forced by financial and political factors as an architectural solution, in practice it works out rather well and to me seems in keeping with the episodic nature of the city.